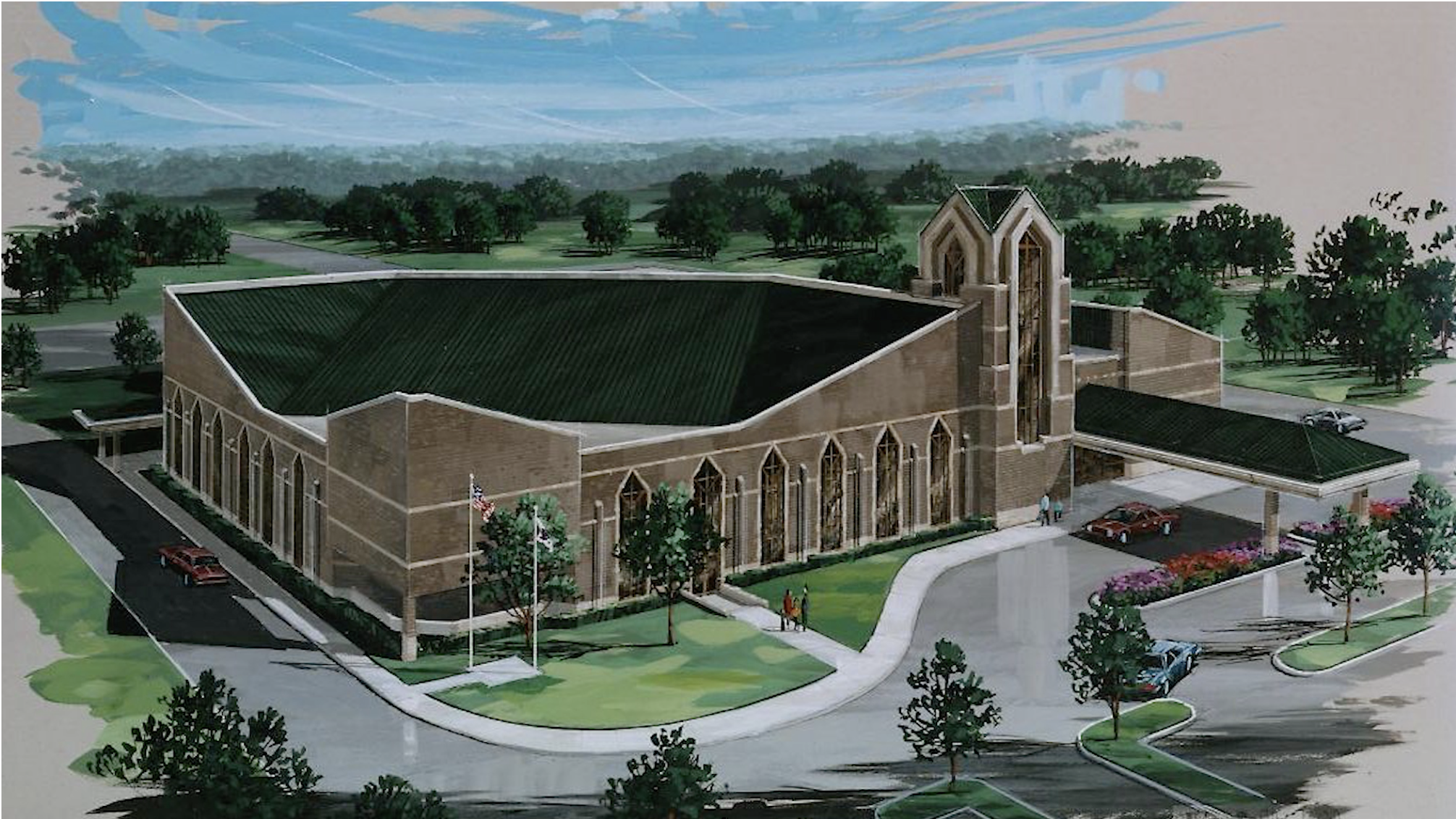 In 1958 a group of 50 people from the Brooklyn Alliance Church began meeting at C.A. Thomas Elementary School (later the Tri-City Senior Center and now soccer fields) on Bagley Road in Middleburg Heights.  Jim Seward, a commercial artist, was the lay pastor.  The first person to come to Christ, Julia Shuster, lived across the street from the school.  The church purchased her property, which had been used to grow chickens, pigs, and tomatoes, for its first building.

Donald and Elfriede Schaeffer were called by the church in 1962 to be their first full-time and ordained pastor.  They came with their four young children–and had five more here!  For the first five years of their ministry, church growth was very slow, and the congregation was not able to build up any financial reserves.  Nevertheless, the congregation began to build a small building in 1967, and God began to bless.  Though the building size was planned to permit a tripling of attendance, by the time it was completed it was filled.  And though it was built without any cash on hand, the building was completely paid off in five years.

In 1973, as Grace continued to expand our ministry in the community, a new sanctuary was added with additional classrooms.  People continued to come to Christ.  In the years that followed, hundreds of people lovingly invested energy and time in reaching out to the community, and many new ministries were initiated. Within a short time the church was averaging an attendance of 500 people and was experiencing God’s rich and continual blessing.

In 1996, Grace moved from Bagley Road to their initial facility here at 7393 Pearl Road, providing much-needed additional space for outreach and discipleship ministries for all ages.

By this time Pastor Donald was in his mid-60’s and told the church his years of leadership were limited.  The elders asked him to stay until the Pearl Road building was completed.  Because it is usually very difficult to follow a long ministry (already over 30 years) they suggested they hire an assistant for Pastor Donald, and the “baton” be gradually passed to him.  A few years before, they had called Donald’s youngest son, Jonathan, who was born here, but he turned the call down.  Now they called him again to assist and transition into senior pastor, and he accepted and came in 1998.

In 2003, Grace launched a new church in Old Brooklyn, our first launch since West Park CMA Church (now Lighthouse) was started in 1987.

We completed a new Worship Center in 2004, as well as additional classrooms and nurseries, which have allowed countless more people from the community to grow in their relationship with God and discover how they can best serve Him.  In 2008, we celebrated 50 years of ministry with a huge joint service at Baldwin Wallace College.

In 2009, we launched Hope Church in Brunswick, which quickly began to grow, making an impact in its community.

A new parking lot & additional classrooms were added in 2011 to accommodate an average attendance of 3400 people at worship services.  A network of house churches was also launched from Grace Church in the Cleveland area.

In 2014, we launched Signs of Grace Deaf Church in Grace Church and in 2015, Hope Community Church in Olmsted Falls, Ohio.

Pastor Donald Schaeffer graduated to heaven on Friday, October 10th, 2014.  He is as alive as he’s ever been, in the presence of the One he loved most and served with all his heart.  While we all miss him dearly, we remember how Pastor Don always said there’s a win-win for those who know Christ:  we either live with Jesus and serve Him here on earth with purpose and impact, or we get to be in our amazing forever home with those who share our belief in Christ.

But what really brings us joy is that over the years there have been more than 5,000 professions of faith (more than 100 per year), over 2,000 baptisms, and over 60 people who have gone into vocational Christian service!  We have also had the privilege of birthing or assisting numerous outreaches in northeast Ohio and beyond.

“Lord…all that we have accomplished You have done for us.”  Isaiah 26:12: “To God be the glory, great things He has done.”